More than 1,000 people have died from natural hazards in Switzerland over the past 70 years. This graphic shows how avalanches and rockfalls occur mainly in the alpine and subalpine regions and deaths from storms and flooding are especially frequent on the central plain.

Born in London, Thomas was a journalist at The Independent before moving to Bern in 2005. He speaks three official Swiss languages and enjoys travelling the country and practising them, above all in pubs, restaurants and gelaterias.

More from this author | English Department

Has worked as a designer with SWI swissinfo.ch since 2001.

More from this author | Multimedia 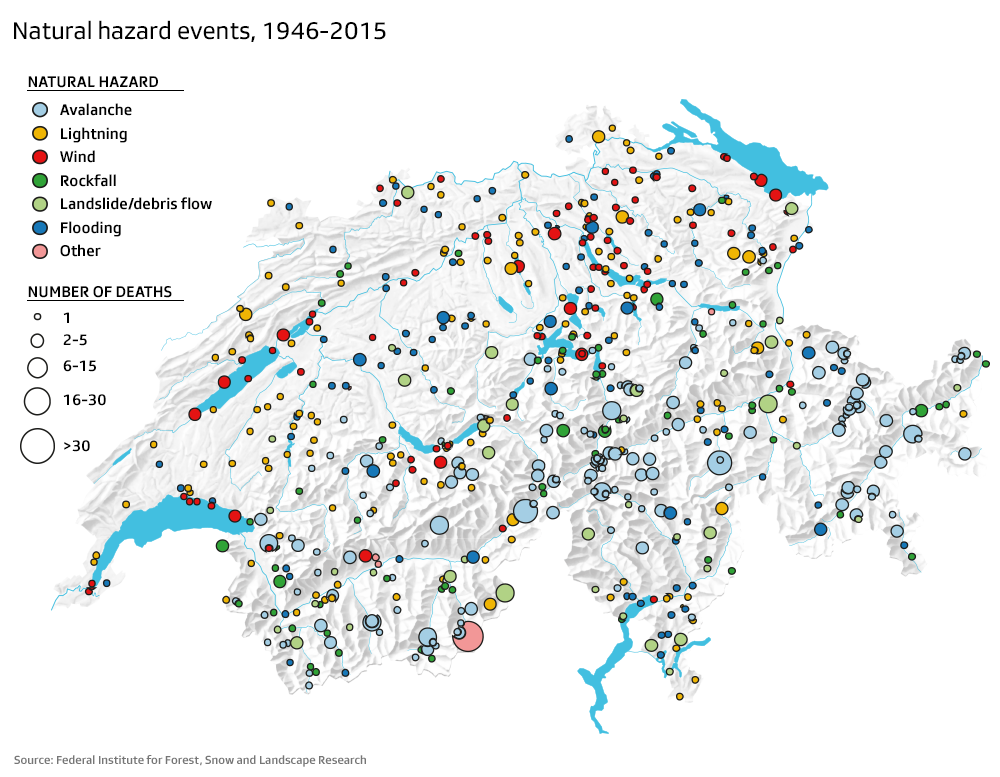 Since the aim of the study by the Federal Institute for Forest, Snow and Landscape Research was to improve civil protection measures, it excludes those victims who died while engaging in leisure activities on unsecured terrain, for example, off-piste and backcountry skiers. Many mountaineers and climbers are killed by lightning or rockfalls, according to the Swiss Alpine Club.

The research showed that over the period in question 1,023 people were killed in the course of 635 natural events. More than a third of all these fatalities were caused by avalanche accidents, with lightning strikes as the second most common cause of death, claiming 164 lives.

Over the past 70 years the numbers of deaths caused by both types of event have clearly fallen. The main reason is intensive research into avalanches, which has greatly improved their prediction. Other reasons include added protective structures and better hazard maps. The number of accidents caused by debris flows, landslides, flooding, rockfalls and storms remained roughly stable.

In a worldwide comparison, the number of deaths in Switzerland caused by natural hazards is lower than average.

Over the past thousand years, Switzerland has repeatedly experienced major natural disasters causing hundreds of fatalities, like the earthquake that hit Basel in 1356 or the landslide in Goldau, a village in central Switzerland, in 1806. But the country has been spared any such events over the past 70 years.

The biggest disaster over that period occurred in 1965, when 88 people were killed by an ice avalanche during construction work on the Mattmark dam in canton Valais. Avalanches in Reckingen in 1970 claimed 30 lives, and 19 more died in those occurring in Vals in 1951.

However, natural disasters in Switzerland account for only a small proportion of all fatal accidents. Between 1946 and 2015, 60 times more people were killed in road traffic accidents and about five times more died in rail accidents than were killed by natural hazards.

A global stress test for freedom of expression

One of democracy’s fundamental pillars is under attack, and under scrutiny, across the world.